Until recently, Myanmar, or Burma, was shrouded in mystery; to many, a no-go area because of its brutal military regime and human rights record. But the dawn of democracy over the last few years means the country has opened the doors to tourism. A whole fleet of gleaming new riverboats has launched on the Irrawaddy river, while ocean cruises are calling at Yangon, the country’s buzzing capital, as a regular stop on their Asian routes.

You might wonder what all the fuss is about, arriving in Yangon, with its crazy traffic and hotel prices to rival those of London. But scratch the surface of this impossibly beautiful country and you can quickly see why visitors are flocking here in search of a more ‘authentic’ Asian experience. 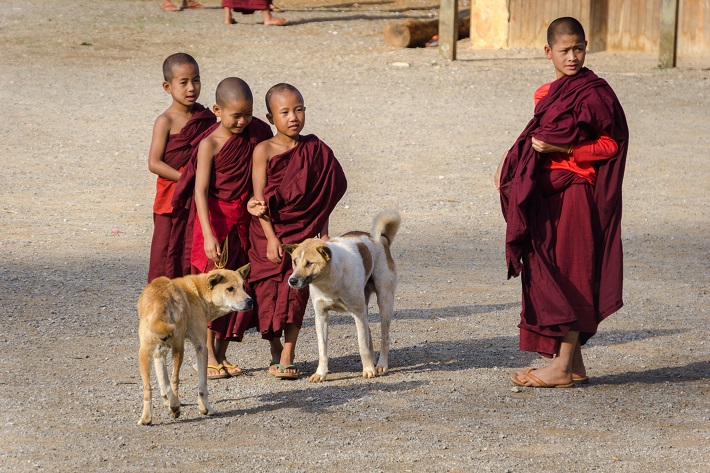 Outside the cities, daily life hasn’t changed. Women paint their faces with a yellow paste made from the bark of the thanakha tree and men wear the longyi – a kind of sarong. Houses in riverside villages are built on stilts and pigs snuffle around in the dust. The people, devout Buddhists, are gentle, and the single most important word you can learn is ‘Mingalaba’ (‘auspicious wishes’), as you will repeat it many times a day. The countryside is astonishingly beautiful: rolling wooded hills studded with shimmering golden temples and scenes unchanged in centuries, with oxen still used to plough the emerald-green paddy fields. 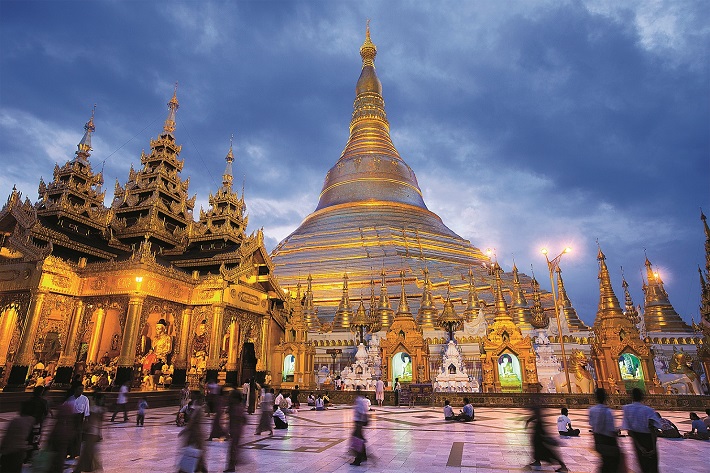 Ocean cruises stop at Yangon and operate tours from there. Lines visiting include Azamara, Fred. Olsen, Silversea and Seabourn. Typically, ships overnight here and all of them offer excursions to see the vast, gold, 2,500-year-old Shwedagon Pagoda, Myanmar’s most important Buddhist site.

But by far and the best way to get a feel for Myanmar is on the river. The Irrawaddy – the famous ‘Road to Mandalay’ in Kipling’s poem – is the country’s lifeblood and main trade route. River cruises operate as far north as Bhamo, tucked up against the Chinese border, and as far south as Yangon itself, some 600 miles away. Most only go as far north as Mandalay; beyond here, the river is wide and shallow and threaded with sandbanks, and only ships with the shallowest drafts can get up to Bhamo, among them Avalon Myanmar, Belmond’s Orcaella and some of the Pandaw boats. 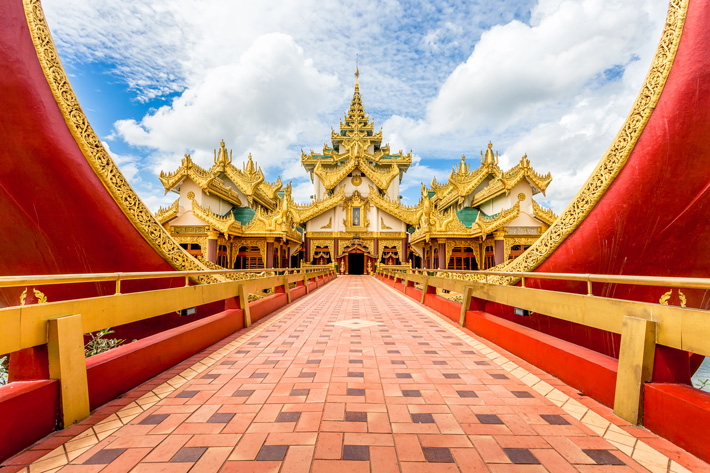 So what will you see on the Irrawaddy? Temples, hundreds of them! Some gleaming gold, some red brick, some in a state of disrepair and others crammed with riches – golden Buddhas and dozens of secondary shrines featuring mini-Buddhas. But don’t worry about getting ‘templed out’ – there are many more reasons to go.

Near Mandalay, a highlight is the U Bein Bridge, the world’s longest teak bridge which spans a lake outside the city. Sunset is the only time to visit and most cruise lines offer a tour in rowing boats, pottering around the lake as the sky turns fiery orange and the spindly bridge with its cargo of monks, tourists, cyclists and women carrying packages on their heads is back-lit by the setting sun in perfect silhouette. 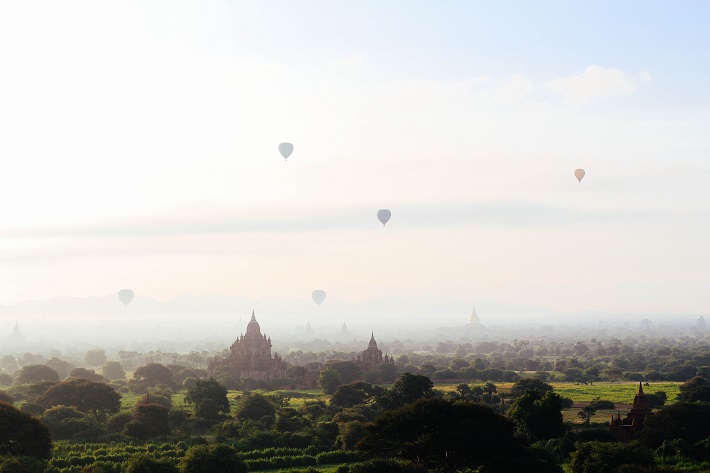 Bagan is the big show-stopper, with 2,000 temples scattered across the river’s floodplain. Most ships overnight here, so you can climb to the top of some of the pagodas to watch the sun set and meditate as the distant Irrawaddy reflects the burnt orange sky. Or book a balloon flight with Balloons over Bagan, They pick you up at the ship, pre-dawn, and you drift over the temples, watching the sunrise.

From Bagan there are half day trips to Mount Popa, an extinct volcano nearly 5,000 feet above sea level, and the sheer-sided volcanic plug of holy Taung Kalat, a skyscraper of solid rock rearing improbably out of the forest with a cluster of gold stupas clinging precariously to the top.

On voyages including Bhamo you’ll sail through the Second Defile, a sheer-sided gorge. The river squeezes between sheer cliffs on which Buddhists have built shimmering gold stupas, teetering high above the water on jagged rocks. A couple of ships sail up the Chindwin, a tributary of the Irrawaddy, into really remote countryside, visiting monasteries, temples and riverside market towns – an itinerary for those who have seen the main sights and want to explore deeper.

Voyages of fascination on luxurious ships 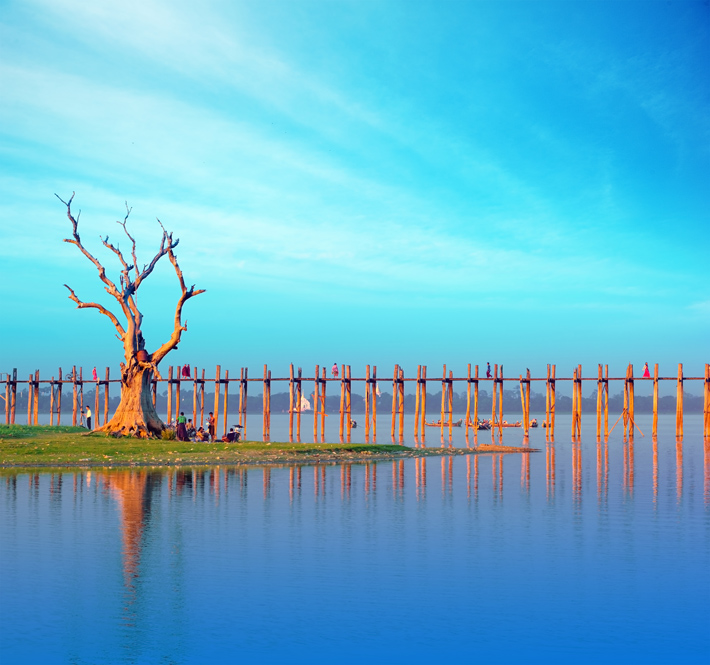 Travel in Myanmar is still rough and ready, despite the lavishness of some of the new river cruise ships. There are very few jetties, so be prepared to scramble over the gangway and up a sandbank in many of the stops. Away from the main tourist centres, little English is spoken.

The ships, though, are luxurious. Avalon Myanmar is gorgeous; Burmese-built and themed, with dark wood and local art, and serving superb food, much of it local. Scenic operates the new Scenic Aura, all-inclusive and done out in a contemporary colonial style, while APT has just launched the very smart 60-passenger Samatha. Sanctuary Resorts operates the pretty Sanctuary Ananda, while Yangon’s famous colonial Strand Hotel recently launched a palatial boat, Strand Cruise. Belmond, which also has a stunning hotel in Yangon (the Governor’s Residence), has two riverboats, the Road to Mandalay and the newer, 50-passenger Orcaella. 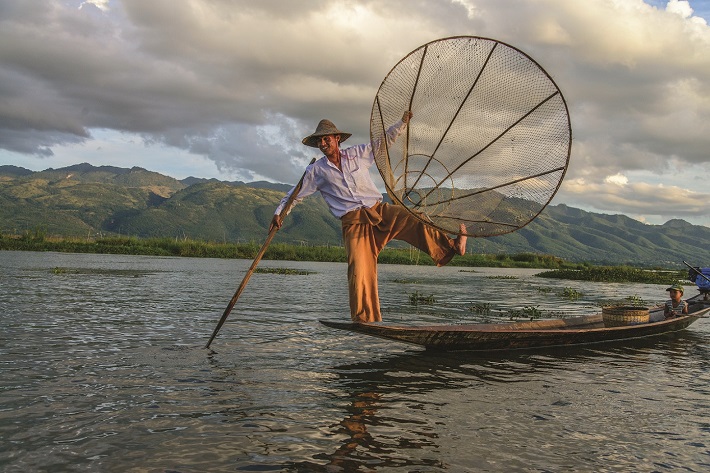 Pandaw has the largest fleet on the river and is leading the way in new itineraries as Myanmar opens up, with a new cruise exploring the wetlands of the Irrawaddy Delta and a new ocean route through the 800 islands of the tropical Mergui Archipelago in the south, visited only by a few dive boats and the sea gypsies who fish in the islands. This is one place you really can, in cruising terms, claim to be a pioneer.

Would you like to experience the exotic delights of Myanmar and the Irrawaddy for yourself? Take a look at our Irrawaddy river cruises and discover Asia like never before.

Sue Bryant is an award-winning writer and cruise editor of The Sunday Times, also contributing to magazines, guidebooks and websites worldwide. She blogs about her great loves, small ship travel, river cruising and expedition voyages at www.small-ship-cruising.com. In 2016, Sue was awarded the coveted ‘Contribution to Cruise Journalism’ award by CLIA for her coverage of the industry.

Gallery image with caption: From port to port: What to expect on a Danube river cruise?