Giverny is located 50 miles from Paris and sits on the right bank of the River Seine at the point where the waterway meets the River Epte. The settlement dates back to Neolithic times and Gallo-Roman archaeological finds from the first and second centuries have been unearthed there. Travellers voyaging along France’s most famous river will almost certainly stop at Giverny, as though vine cultivation has long been a main source of income for the village’s people, today it is most famous for its association with the legendary artist Claude Monet, who lived and worked in the village throughout his life.

As you would imagine, the main focus of many river cruise excursions in Giverny is Claude Monet’s House and Gardens. The stone farm house in which the artist lived and worked from 1883 until his death in 1926, as well as its surrounding gardens, are open to the public and make for a fascinating experience. It is indeed humbling to explore the very place which was such a constant for the artist and the beautiful water gardens are a particular highlight and feature the actual pond which was the subject of Monet’s famous ‘Water Lilies’. Yes, the lilies are still there and though you’ll not have time to paint your own likeness of them, there’s nothing stopping you from capturing your very own photographic representation.

The Impressionist Museum is another artistic attraction, housing a number of Monet works as well as those of a renowned Japanese impressionist. It has its own picturesque gardens and is located just a short distance away from Monet’s House and Garden, so it’s possible to explore both during your visit to Giverny.

The main architectural attraction in Giverny itself is its church which is also the final resting place of Monet and you can discover this marvellous structure for yourself on a stroll through the village. Giverny is also home to a touching memorial to a British bomber crew whose plane was shot down near the town during the Second World War.  It’s not all about artistry of the canvas in Giverny however and if you want to experience something different, head to the Museum of Natural Mechanics, which houses a wealth of historical machinery dating back to the glory days of steam and agricultural industry.

If you're an art-lover or know someone who is, then you really don't want to miss the chance to pick up a souvenir from Monet's historic home, where postcards of both the interiors and the gardens are available. Failing that, your own photograph of his famous water lilies would also make an excellent gift or keepsake. 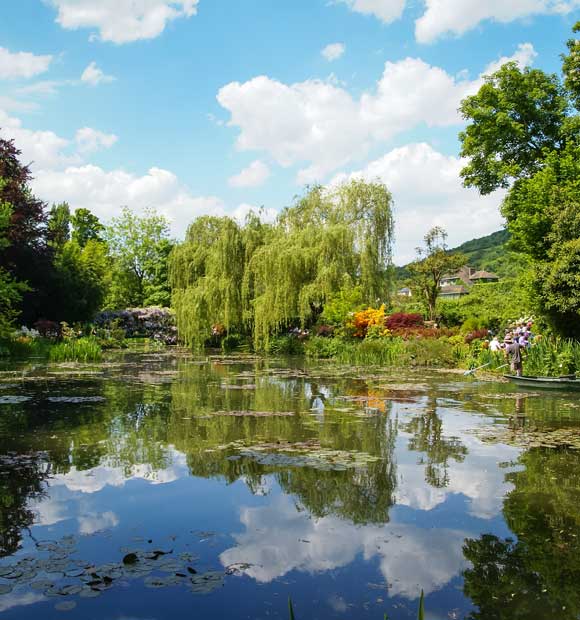