The Spanish capital of Madrid is one of the Iberian Peninsula’s most iconic and captivating cities. Situated on the banks of the Manzanares River, it is renowned for its rich heritage, vibrant contemporary culture and exciting nightlife, regarded as one of the best in the world. With a population of over three million, Madrid is located the northeast of the middle of the Iberian Peninsula, at the centre of the scenic Castillian plateau. Madrid’s historic city centre is home to a wealth of fascinating districts, including Puerta del Sol, Plaza Mayor and Plaza de Colón, each offering a wonderful insight into Spain’s long and intriguing past, as well as its marvellous modern culture.

Madrid boasts many fantastic areas to explore and unearth incredible history and inspiring landmarks. Located in the heart of the Spanish capital, Puerta del Sol is a fantastic place to start a day of discovery in Madrid. This historic plaza boasts a number of intriguing buildings and monuments, including the famous statue of King Charles III on horseback, the Bear and the Madroño Tree Statue and the old and impressive Royal Post Office.

Elsewhere in the city centre, Plaza Mayor is one of Madrid’s most popular areas, especially with tourists, where visitors will find a plethora of charming cafes, restaurants and shops offering an authentic taste of local culture. This ancient square has a long and fascinating history, having played host to everything from markets and tournaments, to bullfights and executions, but nowadays is magnificent part of the city in which to soak up Madrid’s enchanting atmosphere.

Perhaps one of Madrid’s most famous and dramatic landmarks is the world-famous Royal Palace – or Palacio Real – which is often used for important state ceremonies. This colossal structure is one of the largest palaces in Europe and its impressive exterior is matched by its lavish interior, which can be seen up close on a guided tour of the building.

Madrid is renowned as a city of art and culture, and there is no better place to appreciate this side of Spain’s capital than with a trip to the museum district, often referred to as the Museum Triangle, named as such due to the three key art museums found here. These celebrated museums include one of the world’s finest art museums the Museo del Prado, the classical art collection at the Thyssen-Bornemisza, and the famous modern art museum known as the Reina Sofia. Visitors will also find a number of smaller museums scattered throughout the area, which are also well worth visiting.

As well as its fascinating museums, Madrid is also well-known for its beautiful parks, which include El Retiro Park, Parque del Capricho and the Royal Botanical Garden, each offering the perfect place to relax in the sun and enjoy stunning and colourful surroundings.

Many of Madrid’s museums are free to enter at certain points during the week, for example there is no charge to enter the Reina Sofia Museum after 7pm on weekdays, in the afternoon on Saturday and in the morning on Sunday, so if you’re hoping to visit the city’s best museums, plan your trip accordingly to help save money.

Madrid & Secrets of the Douro - Madrid to Porto 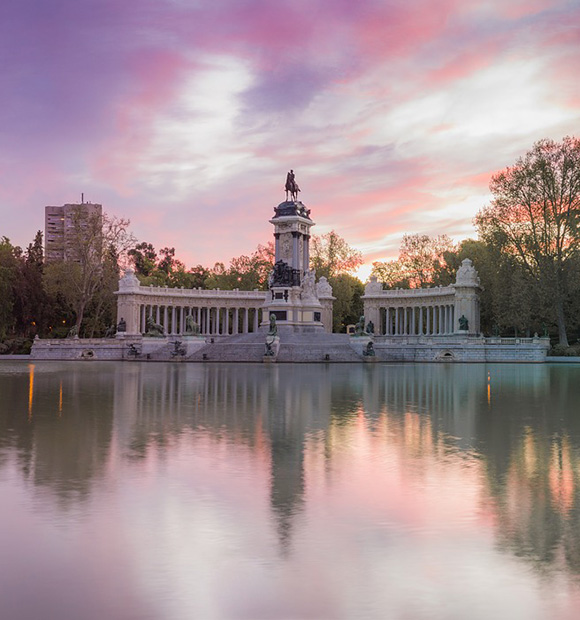 7 sailing dates May 2023 to October 2023
12 Nights From Madrid, Spain to Portugal , Lisbon
VIEW THIS CRUISE

Madrid & Secrets of the Douro

5 sailing dates May 2023 to August 2024
9 Nights From Porto, Portugal to Spain , Madrid
VIEW THIS CRUISE