Situated on the Main River in the state of Hesse, Frankfurt is Germany’s fifth largest city and a river cruise along the Main will often involve a stop there, because there’s so much to see and do. Located on an ancient fjord, the city partly derives its name from the Germanic term for ford, ‘furt’, as it was situated at the point where the river was shallow enough to cross by wading. In its earliest times, it was populated by the Franks, the reason for the origins of the first part of its name. From 855AD onwards Germany’s kings and emperors were elected there and like a great many German towns and cities, it has suffered greatly at the hands of battle over the years being bombarded by French troops during the Napoleonic conflict and by allied air forces during the Second World War.

In a city so massively rebuilt after the Second World War, there are few ancient buildings to see which have not undergone extensive reconstruction but one of the most impressively restored is the Cathedral of St Bartholomew. The original structure dates back to 680AD, though the post-war era building is a faithful tribute to it and is a must-see structure during your visit. Not quite so old but also a very popular landmark is the Frankfurter Romer, the city’s city hall since 1405 and a structure forever linked with its history.

In contrast, a building with a much shorter history is the Main Tower, one of the city’s tallest buildings at 656 feet. Travel to the top (don’t worry, a lift takes you most of the way) and you’ll be rewarded with a breathtaking view of the city and the Main River. It’s important to note that the best views can be enjoyed if the weather’s fine during your visit.

If you have a little more time on your hands while in the city, Frankfurt is also home to some rewarding museums, including the Staedel, which houses a hugely impressive collection of fine art, the Senckenberg Natural History Museum and the German Film Museum. Conveniently, many of them are located on the appropriately-named Museumsufer, which is a scenic street to stroll in its own right and a popular attraction, whether you choose to explore any museums or not.

If you simply want to get away from it all, Palmengarten are the city’s beautiful botanical gardens and home to 50 acres of tropical plants, trees and flowers. Or, if you’re in the city long enough to take in a show, the English Theatre is one of the city’s leading attractions, while the Old Opera House is also very popular with theatre-goers and has been faithfully reconstructed following allied bombing during the Second World War.

Frankfurt is a shopper's dream, with everything from huge malls selling all the leading brands, to a host of smaller bespoke outlets at the forefront of the latest trends. The Zeil is where much of the action is and it's known as one of Europe's busiest shopping streets. 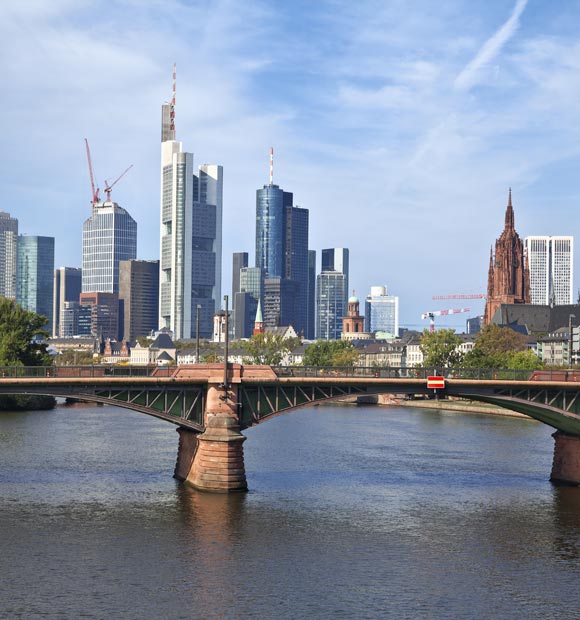 Rolling On The Rhine - Frankfurt to Amsterdam

5 sailing dates May 2023 to October 2023
7 Nights From Frankfurt, to Amsterdam
VIEW THIS CRUISE

The Heart of Germany (West)-Nuremberg to Frankfurt

Rolling on the Rhine - Amsterdam to Frankfurt

6 sailing dates May 2023 to October 2023
7 Nights From Amsterdam , to Frankfurt
VIEW THIS CRUISE