So, you’ve decided to go cruising. But there’s still a big decision to make — whether to sail on an ocean or follow a river. We answer all your questions.

Which offers the widest choice of destinations?

It goes without saying that ocean-going ships have the broadest global reach by far, with destinations from Alaska to Zakynthos, Australia to Zanzibar. But rivers carry you right into the heart of countries, and not only in Europe.

Exotic possibilities include China (along the Yangtze), Vietnam and Cambodia (the Mekong), Burma (the Irrawaddy) and America (the Mississippi).

I get seasick. Will the motion on a river cause me problems?

Hardly. With barely a ripple let alone a wave, you won’t even know you are moving unless you look out of the window. But that doesn’t mean ocean-going ships churn you around like a theme park ride either — particularly if you pick a large vessel and avoid big ocean crossings. Most modern ships are equipped with stabilisers to help mitigate the effect of choppy seas.

I’m easily bored on journeys. Does that rule out river cruises?

Possibly. If spangly shows, casinos, theatrical performances, discos, deck tennis, rock-climbing walls and a full programme of daily activities — all the things you find on an ocean voyage, in other words — are vital to your nautical pleasures, you may wish to forget river cruising, which tends to be a more genteel experience.

That said, you can often find a mini gym, a bird bath of a pool, interesting talks by guest lecturers and maybe a fleet of bicycles for nipping off to villages or pedalling along towpaths. Some sailings are also themed, with a focus on music, gardens and wine for example. 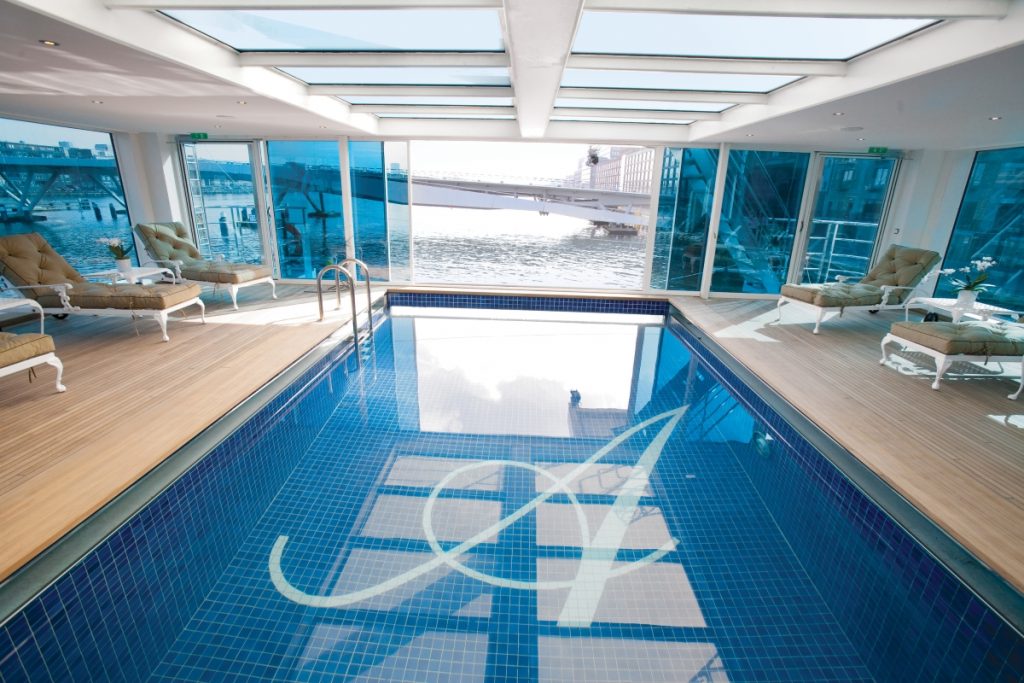 What about shore time?

Sightseeing is the big draw of inland cruising. Rivers were once the main arteries of continental commerce, and many of the world’s most important cities were born on their banks. Sights and sounds come in a constant stream. Unlike ocean cruising, there are no ‘sea days’ where there is nothing to look at for hours on end but the big blue yonder. Even when you are sailing between ports of call, there is always a pageant of scenery on both sides of the ship.

Be honest — aren’t all rivers really the same?

Not at all. Aside from the waterways of the Far East and South America, there are enormous differences — scenic, cultural, historical — between the main rivers of Europe. The Seine and the Danube, the Volga and the Douro, the Elbe and the Po — each has its own characteristics, quirks and charms.

I hate flying, so should I sail from a UK port?

Yes. Several ocean cruise firms base some of their fleet at UK ports — and not only Southampton. This year, more than 600 different cruises will cast off from home ports — Fred Olsen offers sailings from ten different harbours, from Belfast to Bristol. And don’t forget trains. Several rivers — including the Danube, the Rhine, the Seine and the Rhone — can be easily accessed on the Eurostar and high-speed German and French trains.

Is the food the same on ocean and river ships?

If you are a foodie, choose an ocean-going ship with speciality restaurants. These are plentiful and often endorsed by celebrity chefs (such as Marco Pierre White and Atul Kochhar on P&O, Thomas Keller on Seabourn, Jamie Oliver on Royal Caribbean and Nobu Matsuhisa on Crystal).

However, the culinary pleasures on the five-star vessels that wander the planet’s internal waterways are one of the best reasons to choose a river voyage. The downside is that dinner is generally a single sitting, and often at 7pm, though you can usually sit where you want. 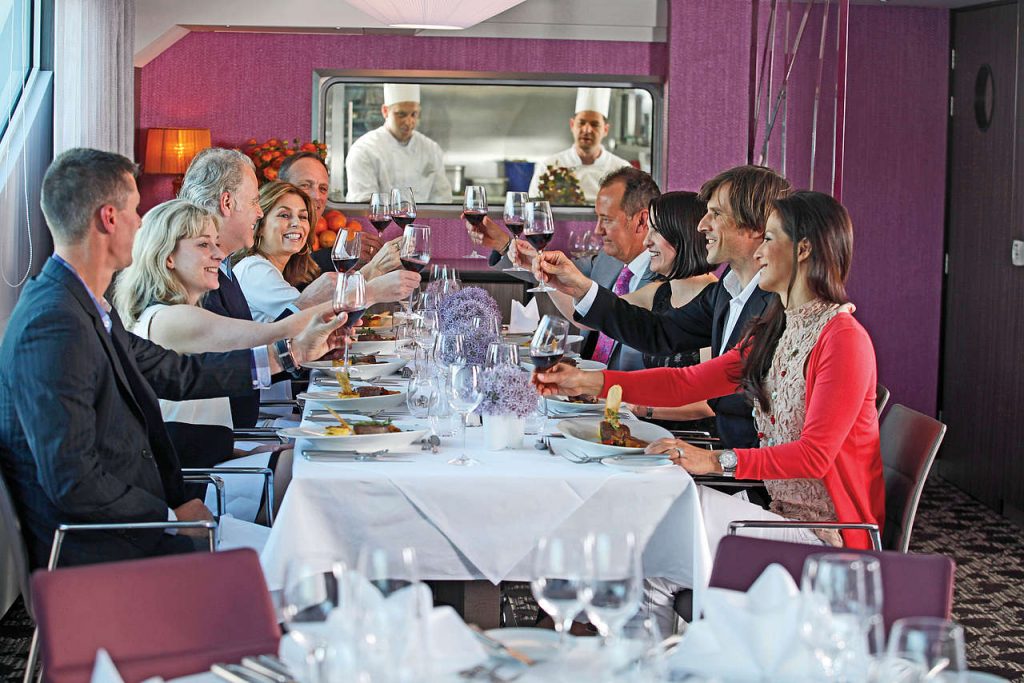 Can I dress up for dinner on five-star river ships?

Even on the poshest river ships, there are no formal nights; not even ties and posh frocks, let alone black tie and ball gowns. River cruises are generally a lot more casual than sea voyages.

How do river and ocean trip prices compare?

At first glance, comparing stars with stars, a river ship may appear to be more expensive. But its itinerary usually includes several shore excursions, wine with meals, gratuities and wifi — all of which may be charged as extras on many ocean cruises.

To get a balcony, should I stick to the high seas?

Most balconies on river ships are in the Juliet style, with fully operational windows that open on to a barrier. There is a good reason for this. River vessels need to be slim in order to fit into locks. So, in the main, if you want a broad balcony, stick with the ocean-goers.

On the other hand, though river ships tend to have a smaller range of cabin options, you rarely find any windowless interiors. As a general rule, the less you pay, the lower the deck and the smaller the window. 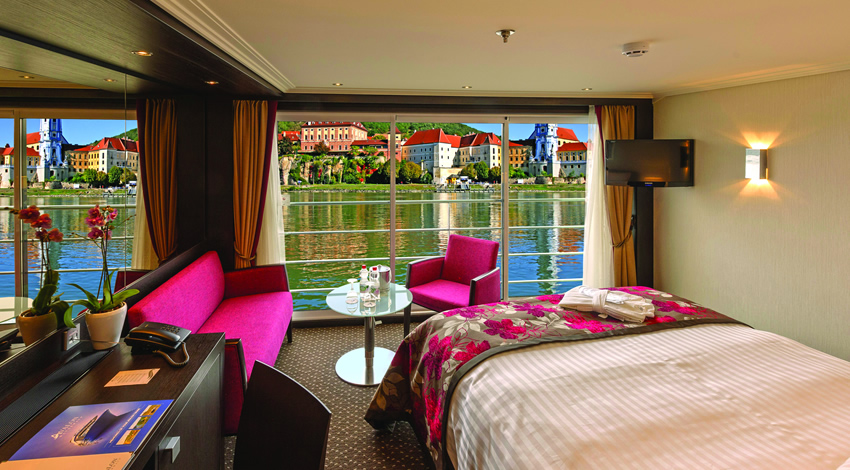 Do both trips attract the same age groups?

Give or take a year or two, the age demographics of both river and ocean-going cruising are very similar. Easy travelling, the convenience of never having to re-pack, guided shore excursions and high service levels have obvious appeal to seniors.

One plus of rivers is that the vessels tie-up bang in the middle of towns, and there is never any need to clamber aboard a tender to travel between ship and shore. Even getting on and off at a quayside is a lot more seamless on a typical river ship — where the exodus tends to be somewhere between 100 and 200 passengers rather than the 5,000 people who can spill out of an ocean-goer.

Can I cruise all year?

Yes on ocean-going ships, less so on rivers — though it depends on how far afield you’re willing to go. Far Eastern river cruises, for example, are less affected by seasonal fluctuations in weather. But in Europe, the main river season runs between March and October, with just a handful of Christmas market options in the colder months.

Will my children enjoy a river cruise?

No. They are unlikely to find any playmates of their own age, there are no kids’ clubs to keep them occupied and the shore excursions will probably bore them rigid (unless you happen to be blessed with progeny who appreciate Renaissance art or Viennese cafe culture). With the odd exception, river cruising is for grown ups.

I’ve heard that rivers can run dry. Is this true?

It can happen — and did in 2011 on sections of the Danube, for example. Too much water can also be a problem. In these exceptional circumstances, coaches would be laid on — not ideal, as transfers by road are not what passengers sign up for. Thankfully, these situations are infrequent.

Yes, this can happen. River ships sometimes have to stack up beam to beam alongside a quay, which means traipsing through the neighbour’s lobby to go ashore. The Nile is the worst offender for this (though less so since travel to Egypt has taken a dive). But some ocean-going ports can be overstuffed too, with Nassau and Venice being two bottlenecks

After reading this you may be leaning more towards either a river cruise or an ocean cruise, but you’ll probably still have questions about which ship or itinerary is best for you. And of course, you’ll want to make sure that you get the best deal!

Here at River Voyages, we have a team of expert River Cruise Concierge who are available to help with every aspect of planning and booking your perfect river cruise. So if you’d like any advice, please give us a call on 0800 197 0854.

If you’d like to speak to someone about ocean cruises, our sister company Cruise118 also have Cruise Concierge who will be happy to help.

Gallery image with caption: How can water levels affect a river cruise?