Anyone who’s used to ocean cruising will be familiar with the main cruise ship cabins types of inside, outside (window), balcony, and suite. But how do these compare with the types of cabins found on river cruise ships? 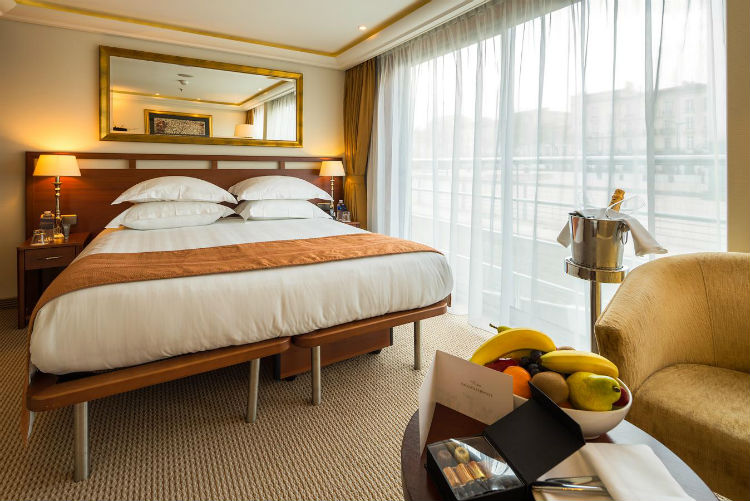 One key difference with river cruise ships is that you won’t find any inside cabins. This is because the ships are narrow – roughly the same width as two cabins and a corridor – which means that everyone gets at least a window.

The four main cabin types which you’ll find on river cruise ships are a window, French balcony, balcony, and suite. 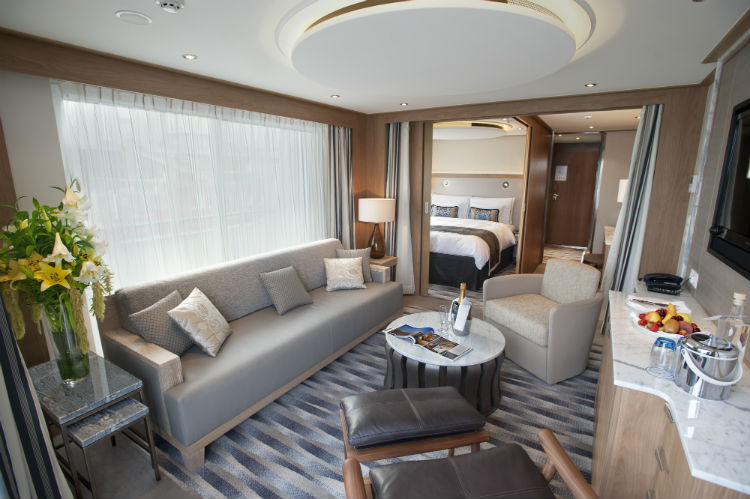 River cruise ship cabins tend to be slightly smaller than their ocean cruise ship equivalents. This is because the ships themselves are smaller as they have to fit through narrow canals and locks.

On the waterways of Europe, double cabins are usually about 150-170 square feet. Whereas in Asia, they tend to be a bit larger, around 220 square feet, and you’ll find fewer passengers on each ship.

When choosing a cabin and comparing the sizes, an interesting issue arises – a 180-square-foot cabin is mathematically 20% larger than a 150 square-foot cabin. However, on-board it may feel twice as big.

Well, much of the space is used up by furniture. If each room has the same furniture, which takes up 130 square feet, then space you have to move around in increases from 20 square feet to 50 square feet with the upgrade – so more than double.

Bear this in mind when considering whether a larger cabin is worth it. What may look like a small difference in size on paper, can actually feel much bigger once you’re inside. 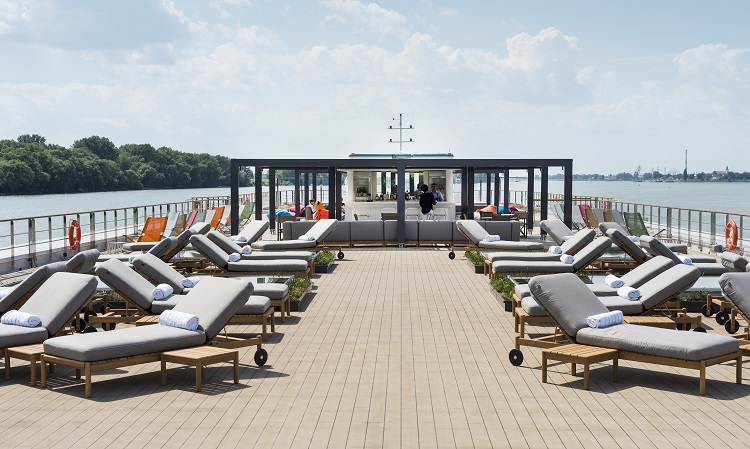 Most European river cruise ships have two or three decks. It’s not possible to have more than this as ships have to be low enough to fit under bridges.

On the lower deck, the cabins often have small windows which are situated at the top of each cabin near the ceiling. These types of cabins, which are at the water level and are the cheapest, are humorously referred to as ‘aquarium class’ and are said to offer a ‘duck’s eye view’.

However, the price difference between these cheapest cabins and the next deck up may be considerable. If you’re likely to use your cabin only for sleeping and changing, then you may want to save money by opting for a cheaper lower deck cabin and spend your time up on the sun deck.

On the upper decks, you may find the other cabin types with larger windows, French balconies or walk-out balconies, which are explained below.

What is a French balcony cabin? 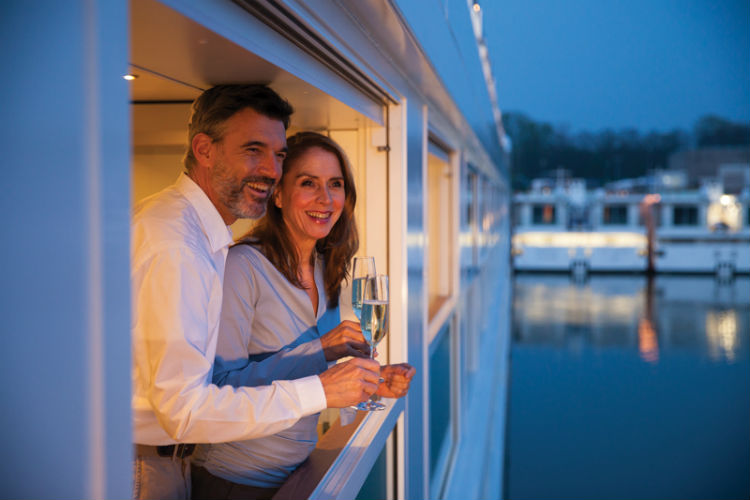 A French balcony is also known as a Juliet balcony (inspired by that famous Shakespearean play). Just as in the play, a French balcony looks like a normal balcony, except that there is a rail there so that you can open the glass door but not step outside into a separate space. Sometimes you’ll find a table and chairs by the balcony so you can still sit and feel like you’re outside. 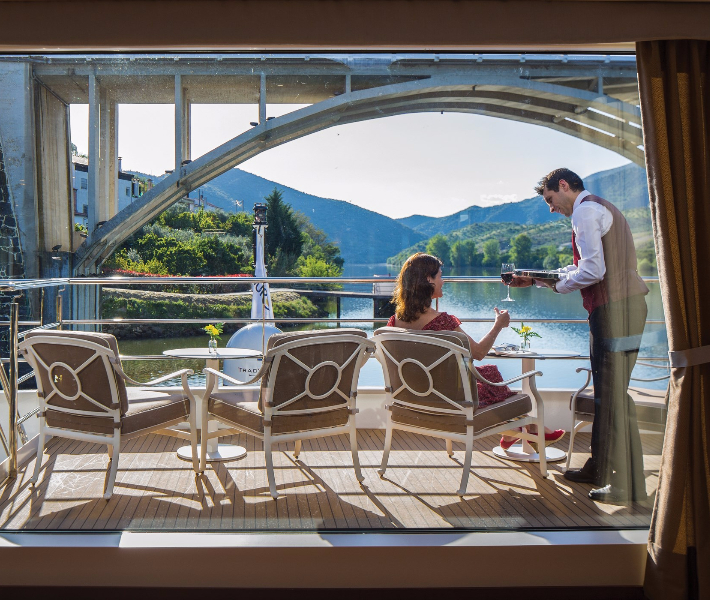 Real balconies which you can walk out on aren’t found on every ship, in fact, they’re quite rare. If a step-out balcony is a must for you, you can find these on Viking Longships and also on some of AmaWaterways’ newest ships.

It’s worth keeping in mind that a real balcony isn’t as desirable on a river cruise ship as it is on an ocean ship. One reason for this is that ships sometimes moor up alongside each other, meaning that your balcony would be right up against that of a neighbouring ship. Hardly a spectacular view! Even if the ship is moored against a bank, you may have people walking right by it all day long – there’s no privacy.

The weather in Europe can also be unreliable in anything but the summer months, meaning that it’s often too cold to sit outside on a balcony for long. 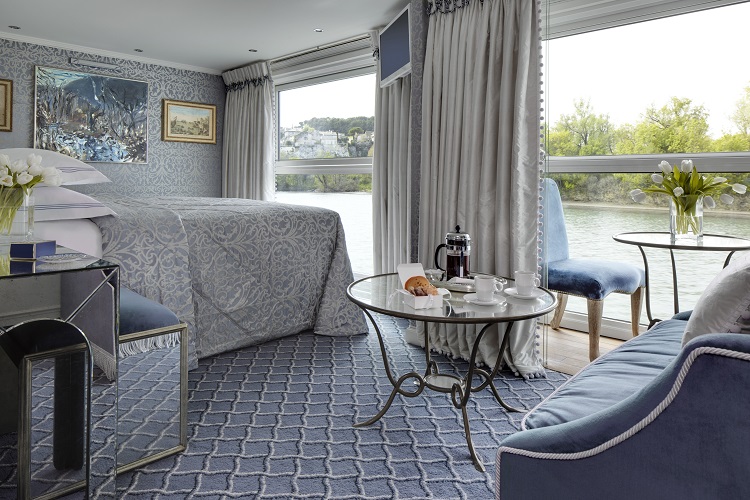 On an ocean cruise ship, a suite usually means a cabin with a separate living and sleeping area. On river cruise ships, however, whilst two-room suites do exist, most suites are just larger versions of standard cabins.

On Avalon Waterways, the fleet includes ships dubbed Suite-Ships, where all of the cabins are called suites. However, none of them has a separate living room, even the Royal Suite. 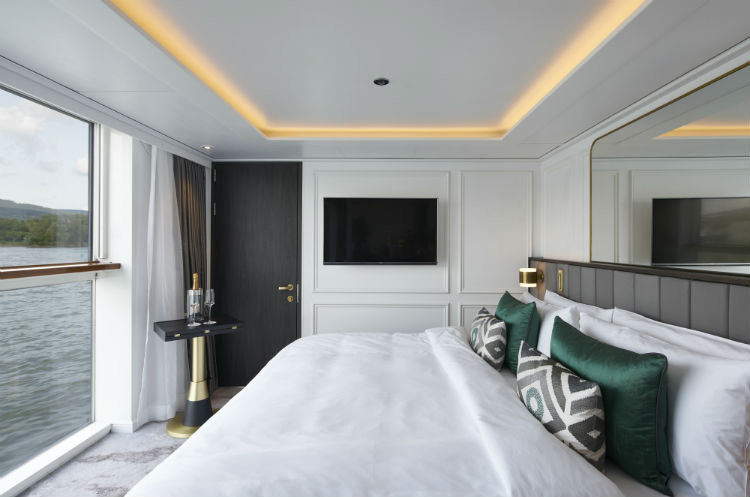 Single cabins on river cruise ships are unfortunately few and far between. It’s much more common for solo travellers to book a double cabin for sole occupancy.

Single supplements are often high with river cruising, so it’s worth looking out for reduced single supplement deals if you can spot them, or speak to one of the Cruise Concierge team here at RiverVoyages.com who will be happy to advise.

Is there a particular cabin type that you tend to go for when booking a river cruise? Let us know in the comments below.

If you’d like any advice about the different cabin types or to see more details on any particular cabin, please give our river cruise concierge team a call on 0800 197 0854. They’ll be happy to chat about all things river cruise, and can help with every aspect of planning and booking your dream holiday.

Gallery image with caption: The best books to take on your river cruise